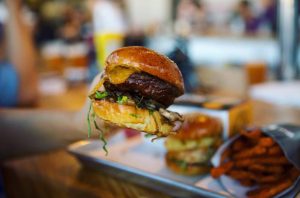 Orange is a busy city with numerous parks, lakes, and attractions. Whether you want to tour a wildlife sanctuary or spend a day shopping at the outlets, you’ll find something exciting happening every day in this community. Orange is home to some of California’s best shops and restaurants. At the Outlets at Orange, you can browse dozens of retail stores, catch a movie, visit the skate park, or spend an afternoon bowling.

The plaza features antique shops as far as the eye can see and it has become a mecca of sorts of antique collectors around the country. In recent years, trendy clothing boutiques and upscale restaurants have joined the scene at the Plaza. Other additions like a Masonic lodge, a new public library, and several coffee shops have created lots of buzz in the community.

In 2017, the most anticipated new burger restaurant in Orange is Burgerim, an US-based burger franchise that has already had great success in other parts of California and in more than 100 locations worldwide.

The new Burgerim is slotted to open on South Main Street later this year. Burgerim is built on a simple concept: small slider style burgers that can be customized with endless varieties of buns, patties, and toppings. The menu features traditional options alongside of some surprises like dry aged beef, salmon, and chicken burgers. The food is gourmet quality in a casual quick serve atmosphere. Burgerim has managed to make fast food a quality experience again for the first time in decades, which is why they have been so successful on a global scale.

In Orange, food is a big part of culture. When friends go out for a night on the town, it almost always includes a stop to grab dinner. Date nights often center around local restaurants and even business meetings frequently take place over lunch.

Orange loves good food and each year, the International Street Fair puts this passion to a good cause with a wide variety of food vendors along with live music and dance that highlights different cultures from around the world. All the profits from this yearly event go to help local charities.

There’s also a food-centric farmer’s market open every Saturday called Orange Home Grown. It’s open rain or shine, bringing the community together over fresh local produce and a variety of food vendors. With so much emphasis on food in this city, it’s no surprise that Burgerim chose this particular community as a launch point for a new franchise location.

Orange has been a popular tourist stop off for decades, largely thanks to its appearances in films like “Big Momma’s House”, “Ghost Whisperer”, and “That Thing You Do” starring Tom Hanks. With a steady influx of visitors and thousands of locals on the hunt for something new and interesting to eat, Burgerim has ample opportunity to launch with a big splash in Orange. The new South Main Street location is scheduled to open later this year. Stay tuned for more details about the grand opening and make sure you get there early to see what the Burgerim buzz is all about.

previousBurgerim Unites Families Around the World for Mother’s Day